Bike The Strike and Shut Down the GG Bridge

Even though the GG Bridge Occupation has been asked to be cancelled by the Unions. We are still planning a ride in support of all the unions and all the actions for the day and visit all the different demonstrations and marches. Even if we aren’t going to go to the GG Bridge we shall Bike the Strike. So click in and join us: http://www.facebook.com/events/176324942490445/ 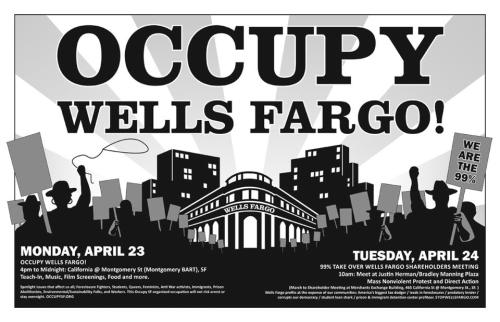 Can we organize enough riders in time:
Contact paul@sfbikecavalry.org and lets see if we can

Thanks to Nathan Jones of the Portland Bike Swarm for this

A very special Thank You to Sheryl Kee for designing this new poster for us. Check out her other work here:
https://www.elance.com/s/copper/portfolio/

Historically, Cavalry has had a twofold role that stems from its speed: to act as advance scouts, and to make flanking attacks. In the realm of Protest Marches, many tactics from cavalry can be applied to protesters with Bicycles. Bicycle Cavalry has been used to some extent by both protesters and police and there are a plethora of tactics we can gain from these examples.

This is a relatively new idea, with some precedent in the Occupy movement. Portland is known to have a bike swarm (read this on some of their successes http://www.portlandoccupier.org/2011/12/15/occupy-portland-outsmarts-police-creating-blueprint-for-other-occupations/), and San Fransisco has a Bike Cavalry (http://sfbikecavalry.blog.com/). Many of these maneuvers require organization, communication, and most of all, training. Please share some of your ideas about uses for a bicycle cavalry in protest marches!Some other suggestions:

1) Via @SFBicycleCavalry: Badges/Something similar to the street medics’ cross to convey a sense of trust between Bike Cavalry and Marchers.
2) Via @PDXBikeSwarm: “Disco Trike” (a bike blasting music) and the presence of the bike swarm itself to show both solidarity and raise spirits. There’s nothing worse than a march without noise!

Welcome to the SF Bike Cavalry blog.  This has been an idea for a long while and finally the time has come.  The idea formed while biking around during the outbreak of the Afghanistan war.  Watching people march through the streets without a sense of direction and being manipulated by the police into traps for arrests.

Friends who started the Mission Burrito project were carrying coolers full of hot burritos several blocks to 16th st Bart to give out free food found it could be so much easier and could begin to reach much further on bicycles and bike carts.

The green thumb in me began thinking about Permaculture and gardens and urban space lacking living things.  Guerrilla gardening came to mind and using bicycles and carts we could mobilize and move through the city with ease.

Practice makes perfect and sometimes running drills and practicing grid search patterns through city streets can mean the difference of finding and relaying information and missing the group entirely and biking around alone during crucial times at an action.

This is a new idea and it needs people to move it along.  You are the leaders and this is your forum. Lets communicate and facilitate our way through some positive change.